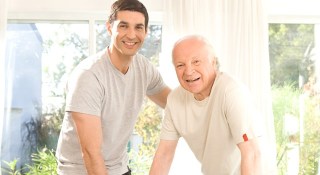 What are the Benefits of Testosterone in Older Men?

As men age, their testosterone levels naturally become lower. For some men, low testosterone can be even more severe and produce a variety of symptoms. New studies have found that testosterone treatment can greatly benefit men who are affected by these symptoms.

The newest research is based on the largest study of its kind to date. It was conducted by several universities, including the Baylor College of Medicine. Organizations such as the National Institute of Aging were also involved. The multigenerational study focused on potential benefits of testosterone treatments.

Some of the benefits of testosterone were expected, but other benefits that appeared were somewhat surprising. The testosterone gel restored testosterone levels to mid-normal for a young man, which carried many benefits. The research is still ongoing and being published, but the first three trials are out and show benefits in three different areas.

The benefit that was most expected, and proven, was a restoration of sexual function. Participants who used the testosterone gel had increased sexual desire and activity, as well as an increased ability to obtain and maintain an erection. This benefit of testosterone treatment can also improve self-esteem, mood, and vitality.

Another benefit that was determined was physical endurance. The trial urged men to walk for six minutes to determine if the distance they walked would increase as their testosterone levels increased. Although there was not a significant increase individually, cumulatively the study did show that there was an increase in the distance walked.

Finally, increased testosterone from the testosterone gel treatment caused improved mood and diminished symptoms of depression. If you are suffering from low testosterone and it is affecting areas of your life, do not suffer in silence. Contact us today for more information about available testosterone treatments.

Good health should be in reach for everyone!